Skip to content
HomeDeception and warA nurse that faints or a vax that kills?
Spread the love

HERE WE GO: NURSE IN ALASKA DIES 10 MINUTES AFTER CORONA SHOT, AND THEN THIS ONE IN CHATTANOOGA TENNESEE WENT DOWN ON CHATTANOOGA CHANNEL 3 LIVE, ON AIR.

And I am sure Snopes will have a nice debunk all faked up in minutes!
In the video: Channel 3 chattanooga was broadcasting health care workers getting the shot. The first nurse got it on camera, looked dazed right afterward, got more and more dazed and within fifteen minutes passed out and fell to the floor, LIVE, ON TV. This happened AFTER the nurse in Alaska died (about as quickly.) there is no confirmation this nurse died, and there never will be. She’ll be finnigan, up again, feeling like a pup again tomorrow, even if it takes an AI deep fake to accomplish it.
Look at her. You can tell she is already on her way out two minutes after the shot, with her eyes bugged wide open, trying to convince herself nothing is happening to her because only a nutcase would think so, and then minutes later DOWN SHE GOES. Psych warfare worked well enough to take THAT nurse out, she’s an obvious GONER.

IMPORTANT: THIS WAS THE HEAD NURSE, IDENTIFIED ON HER TAG. YOU CAN DAMN WELL BET SHE WAS NOT SQUEAMISH ABOUT NEEDLES AND DID NOT PASS OUT FROM ANYTHING OTHER THAN A SEVERE ADVERSE REACTION WHICH WITH LITTLE DOUBT WAS PLANNED BY THE MANUFACTURER.

In this case, the “adverse reaction” was probably sudden death but she’ll be just fine tomorrow, BET ON IT.

ALLOW ME TO MAKE A SALIENT POINT:
Who is getting this shot first? America’s first responders, and medical people. IF YOU WERE DOING THE OPENING SHOTS OF A WAR, FOR MAX DAMAGE, who would you take out FIRST, to make sure no subsequent people got any medical care? This video has the answer! oh, but it is nothing. Don’t worry about what happened, that kind of thing happens ALL THE TIME, there is nothing fishy about this and if you think so, you’re a no good rotten conspiracy theory spewing disturbing ANTI SEMITE. Oh, I’ll also throw in YOU ARE GUILTY OF AN INSURRECTION AND WILL BE CONVICTED OF TREASON if you say anything AT ALL is strange with that vax, GOOD PEOPLE MADE THAT VAX and you’re an ungrateful PSYCHO like that doctor in Britain(France actually) they locked in a nut house for speaking out against the vax if you question that!
Update: Trolls are in freakout mode making up any lie to explain the following. New lies: She has a fainting problem she admits to and stated later, after she got back up. FACT: She’s the head nurse, and if you have such a problem you can’t even be a nurse. You cannot even get a drivers license. You cannot do ANY CRITICAL JOB AT ALL. Let alone put in an IV!
Another lie: Vaccines can’t do that to you. REALITY: If there is a severe adverse reaction, they sure as hell can, and who’s to say this is a vaccine at all?

THEY ARE GOING NUTZ trying to troll what happened to that nurse. They are spewing every lie in the book. Because their MONSTER is at stake, having wiped out THE TOP FREAKING NURSE AT THE HOSPITAL, LIVE, ON TV, WITH THE ORIGINAL VIDEO SEAMLESSLY CONTINUING FROM SHOT TO PASS OUT. THEY ARE SCREWED. Think they’ll give up? ANSWER: There was no evidence of election fraud, WAS THERE. They never lie, DO THEY?

Anne Zink, chief medical officer for Alaska, said the incident will not alter plans for distributing the vaccine.

Scientists do not know precisely why the new vaccine is triggering, in rare instances, a severe reaction

“What we need to find out is what component of the vaccine is doing this,” Paul Offit, a pediatrician and expert on vaccines at Children’s Hospital of Philadelphia, said Wednesday. “Severe hypersensitivity or severe allergic reactions can happen after a vaccine. It’s important to stick around for 15 minutes in case you have an allergic reaction so that you can be treated with epinephrine to ameliorate your symptoms.”

An expert on vaccines says we need to find out what causes these rare severe reactions….

How about Polyethelene glycol[PEG] you dimwit!!

Professor Wodarg said that up to 70% of people are allergic to PEG without even knowing they are.

X. In the Pfizer/BioNTech mRNA vaccinecandidate, polyethylene glycol (PEG) is found in the fatty lipid nanoparticle coating around the mRNA. Seventy percent of people make antibodies to PEG and most do not know it, creating a concerning situation where many could have allergic, potentially deadly, reactions to a PEG-containing vaccine. PEG antibodies may also reduce vaccine effectiveness.

Doctors then immediately moved to block the TV camera in order to cover up the obvious evidence
that the coronavirus vaccine is dangerous and potentially deadly.
This is doctors taking part in the cover-up. 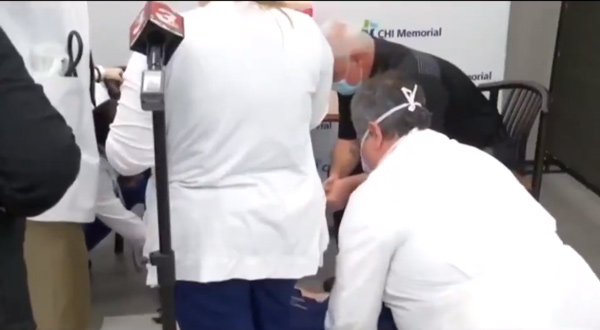 This live TV demonstration of the dangerous nature of the coronavirus vaccine reveals why so many political leaders are receiving fake vaccines on camera, where some syringes have no needles and others are “administered” without the syringe plunger even being pushed. It’s all fake theater for the masses… the very same masses the vaccine globalists are now trying to exterminate.
Twitter, Facebook and YouTube have now deleted all instances of this video in an expansion of the cover-up, obviously in order to protect Big Pharma’s vaccine lies that claim all vaccines are completely safe and effective. Anyone who presents evidence that counters the official narrative is demonized and banned.